What do frozen pizza purchasers, mythology, and pencils have in common? They’re all targeting subsets on Facebook ads, with over 20 million people in each group. With targeting options from aardvarks to the zygomatic bone, how do you figure out who, and how, to target your Facebook ads? 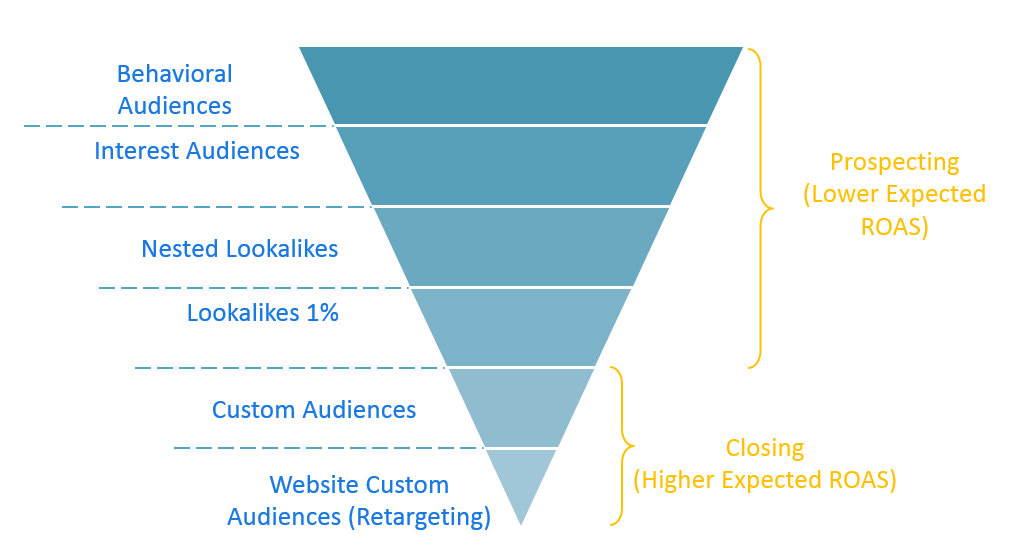 Here at Metric Theory, we view Facebook ad targeting as an inverted pyramid, with highly-qualified custom audiences and website custom audiences (i.e. retargeting) at the bottom of the sales funnel. Custom audiences are based off CRM data, like email lists, that you can upload to Facebook. Website custom audiences are based off pixel data that is collected when people visit your site. While a group of people who have been to your site or previously interacted with your brand is about as qualified as an audience can get, it is also a small group. Whether there are 1,000 or 1,000,000 people in this category, you won’t be able to grow your business if you limit your marketing to people who already know your company.

Since most businesses want to grow (and you can’t grow if you only show ads to people who already know your name), you must move further up the sales funnel to a “Lookalikes 1%” audience. In this case, the audience is based on your current purchasers. To generate this audience, Facebook’s algorithm creates a pool of the top 1% of a country’s population who are most similar to your current purchasers. Within the US, that gives you an audience of about 2 million people, which we typically segment further by age, gender, and placement.

Once you’ve maximized exposure to your Lookalikes 1% group, it’s time to get creative! If Lookalikes 1% have performed well, you should consider additional, broader Lookalike audiences. Also called “Nested Lookalikes,” you could target the top 3% (excluding the 1% you’re already hitting), and the top 7% (excluding the 3% you just created targeting for). Each additional percent ads about 2 million people to your available audience pool. Nested Lookalikes are growing more common within Facebook, and a recent change to Facebook’s audience set-up allows you to exclude smaller Lookalike audiences during the audience creation process.

But what if you want to expand your targeting beyond the people Facebook has algorithmically identified as likely interested in your company? Interest audiences are another effective Facebook targeting option. With Interests, you take control and tell Facebook what type of people you want to target with ads. A user’s interests are comprised of pages they’ve liked, places they’ve checked in, things they’ve mentioned in wall posts to friends, and pretty much anything that has happened in the Facebook ecosystem.

At Metric Theory, our strategy is to create interest groups that contain more than 1 million people. A larger audience gives the Facebook algorithm more opportunity to show your ad to the right people. We always group similar interests together. So an Interest audience of people who like cooking shows would include an interest in Iron Chef, Top Chef, Chopped, Master Chef, and Kitchen Nightmares.

If you are looking to drive sales, you will want to target users based on not just their interests, but also on their buying behavior. Behavioral audiences are similar to Interests, in that you control the targeting and decide who will see your ads. However, Behavioral audiences differ from Interests in that Facebook uses data from 3rd party providers to determine who qualifies for each Behavioral group. With offline behavior tied to online users, you’re able to target based on attributes like type of credit card used, intention to buy a home, or job title. You can even get more creative, and target frozen pizza purchasers, people who go on “casino vacations,” or even people who watch animal shows. Because Facebook is purchasing this information rather than collecting it on its own, this targeting type is frequently more expensive.

Like most Facebook best practices, it is important to test different audiences. Retargeting (website custom audiences) is typically the strongest performer, followed by Lookalikes, then Interests, but we’ve seen Lookalikes actually outperform all others in some instances. Once you’ve found a strategy that works, stick with it!