Finding the Best Facebook Ad Placements for Your Goals

With a slew of decisions to handle, launching on Facebook Ads can be a daunting process for any advertiser. In addition to juggling target audiences and choosing the right objective and creative, you must decide where to place your ads. Facebook currently offers five different places for your ads: Mobile News Feed, Desktop News Feed, Right Hand Column, Instagram, and the Audience Network. This guide breaks down the positives and negatives of these placements to help you decide which ones make the most sense for your advertising goals. 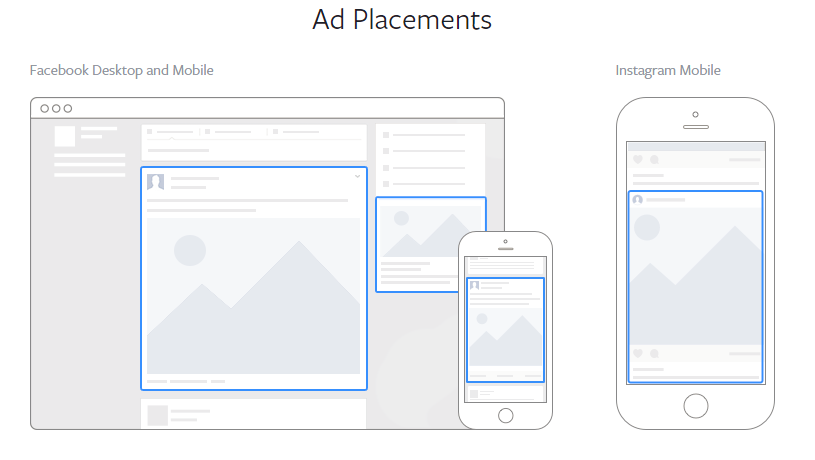 Facebook provides many options for ad creative, and it can be difficult to decide the best for your business. Image via Facebook Ads Guide.

Right Hand Column ads were the original Facebook ads. Available only on desktop, they appear to the right of the news feed, with smaller font and text. These ads have fallen out of vogue recently, as advertisers prefer to have their ads natively occupy the same space as your friends’ news feed updates, rather than the designated ad space. Being separate from the news feed often leads to lower Click-Through-Rates but higher Conversion Rates. Because Right Hands Column ads are outside the normal news feed, the people who do click are more qualified since they’ve gone further out of their way to notice and click the ad.

Most advertisers today prefer to spend their money on desktop or mobile news feeds. One major advantage of mobile ads is that the news feed occupies the full real estate of the mobile screen. Desktop news feed ads show in a vertical column that is a significant portion of the entire desktop screen, guaranteeing that the user won’t miss the ad. Another advantage on mobile is the cheaper clicks. Looking at 5 accounts in different industries over the past 6 months, we calculated that mobile clicks are on average 65% cheaper than desktop clicks.

Why are desktop clicks so much more expensive? For ecommerce advertisers, the ease and security of converting on a desktop makes these clicks more valuable. That’s not to say that conversion rates are uniformly higher for desktop ads. For lower-priced items, mobile could have better conversion rates. Younger audiences are more likely to convert on mobile. Conversely, older audiences or higher priced items often see better performance on desktop.

We typically see high CPCs and less direct performance on Instagram. Despite this, many paid social advertisers are hungry to show ads on Instagram. Studies have shown that Instagram is the preferred social media platform for younger audiences. Many brands want to be associated with a platform that is considered younger, hipper, and trendier, and this competition drives higher CPCs.

Unfortunately, Instagram’s sexiness as a social media platform hasn’t yet translated to success as a direct response advertising platform (apart from Instagram retargeting campaigns). Right now, our data shows people do not convert as often or as cheaply on Instagram as on Facebook. Of course, these trends are as fleeting as a 17-year-old’s purchasing habits.

Facebook bought Instagram in 2012 and first started showing Instagram ads based on Facebook profiles on June 2015. The platform is relatively nascent, and people may grow more accustomed to seeing ads as well as converting on those ads, with time. Over 90% of Instagram’s users are under the age of 35. As this base audience ages, their income will likely increase (and in some cases, begin), and Instagram will become a more viable direct response advertising platform.

Given the opportunity, Facebook reps or Facebook training guides will attempt to expound on the glory of the Audience Network. When you create an ad for the mobile news feed, you can opt to have the ad also delivered on the Audience Network, which will dynamically make the ad a native, banner, or interstitial ad running on Facebook-approved publishers.

While the Audience Network does offer access to ad space unavailable via other placements, the lack of control diminishes several of the positives. After submitting the necessary creative, Facebook will reconstitute the ad to fit various placements, such as native and banner ads. Shifting the copy and image may have negligible impact for some ads, but often the reimaging reduces the overall ad quality.

Banner ads created from Facebook ads tend to be quite tiny with only a small space to get your message across, and are generally not a great visual expression of your brand. Additionally, while Facebook would reassure you that the ads are placed on approved 3rd party sites, there is some mystery about where the ad will show. This is in direct contrast with choosing the other placements, where there is certainty about where your ad will appear.

So, where should I place my ads?

Demographic targeting, price point, CPCs, and current trends are a few considerations you should take into account when choosing placements. We recommend starting with MNF and DNF, then expanding to the Right Hand Column, Instagram, and the Audience Network if the budget allows. Every company is unique and results can often differ from expectations. Test placements separately, and find out which placements drive the best performance for your campaigns.

The Importance of Video Creative in Your Paid Media Strategy

The Importance of Video Creative in Your Paid Media Strategy