Google recently launched Expanded Text Ads that allow advertisers to increase the length of their ads by over 50%, from 95 to 140 total characters. These new ads display on both desktop and mobile devices, and provide a great opportunity for advertisers to take advantage of increased ad copy space. 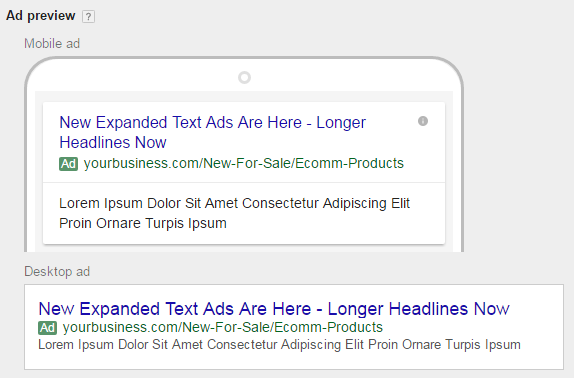 For one particular client, we tested Expanded Text Ads against standard ads across a three-week period with a significant amount of spend, clicks, and conversions. Expanded Text Ads greatly outperformed the standard ads’ CTR by 47% (see chart below). As expected, the larger presence and space for additional unique selling propositions resulted in a better click through rate for the expanded ads.

The conversion rate for the Expanded Text Ads was also 9% better than standard ads. We were surprised to see an improvement in conversion rate in addition to the increased CTR, as we expected conversion rate to fall with an increase in total traffic coming from ads. However, the additional ad space not only allowed us to list more selling propositions, but also allowed us to communicate more information to the target consumer.

Google has stated that their early testing with Expanded Text Ads has yielded CTR increases. We’ve generally seen the same from most of our initial tests.

How to Use Expanded Text Ads

These extra characters give you lots of room to tell potential customers exactly what makes your company unique. Torn between highlighting your low prices or your huge product selection in ad copy? Now you can do both with Expanded Text Ads.

We found that the most effective way to utilize this additional space is to implement ad copy that has previously performed well. Instead of A/B testing your two best-performing unique selling propositions, combine both of them with a clear call-to-action in your ad.

One Note on Mobile

Expanded Text Ads do not have a mobile-preferred option. This means that they use the same ad copy on all devices. If you believe it’s important to display mobile-specific ad copy, you can use two methods going forward:

Google has slowly rolled out Expanded Text Ads and has yet to indicate when this ad format will be served to 100% of ad traffic. With that in mind, Google is strongly recommending that advertisers test Expanded Text Ads side-by-side with standard ads. This is important not only to avoid missing out on traffic, but also to make sure your new ads are performing better than your current standard ads.

In addition, there are instances where Google will truncate your ads on the SERP (especially on desktop computers).

When ads are truncated, it can cause vague or confusing messaging. Be wary of this effect, particularly if you see unexpected CTR decreases or declines in traffic quality or conversion rates. If you are experiencing truncated ads, use the preview tool within AdWords or AdWords Editor to see what ads are being truncated. As a rule of thumb, we recommend limiting the total number of headline characters to 55 (Headline 1 + Headline 2). This should avoid the vast majority of headline truncation issues. Google suggests that you limit headlines to 33 characters to always avoid truncation, but that’s far too conservative for most cases.

Expanded Text Ads are an exciting new feature that provides more ad copy space for advertisers. That said, these extra characters don’t guarantee better performance. You must test Expanded Text Ads to understand what impact they will have on your account, and you should continue to optimize your ad copy, unique selling propositions, and calls to action. The extra ad space is great, but make certain that you’re using this new real estate effectively to drive performance improvements.