If You’re Not on Apple Search Ads, Here’s Why You Should Be

Since the introduction of smart phones, mobile apps have played a larger and larger part in our everyday lives. For context, in July 2008, the Apple App Store launched with 800 apps available for download. Today, the store features over two million apps for users to choose from. Last year, there were 178 billion mobile app downloads worldwide. In 2020, it is estimated that this total will increase to over 258 billion downloads. Apps are a big business, expected to generate about 188 billion dollars in revenue in 2020. A pie that big means the app marketplace is as competitive as it has ever been.

You can no longer just build an app and expect it to be downloaded. Instead, you need to develop advanced marketing strategies to promote your app. Apple recognized this and created Apple Search Ads (ASA) in 2016. Apple Search Ads is a pay-per-click platform that allows you to purchase ad placements in search results within the Apple App Store. ASA gave savvy app advertisers a leg up in getting their apps discovered and simultaneously made it difficult for those who chose not to use ASA to gain exposure.

Apple Search Ads has only one ad placement that will show above all organic listings. If you can outbid competitors on top keywords, you will own the top position and thus the top half of the screen in search listings. 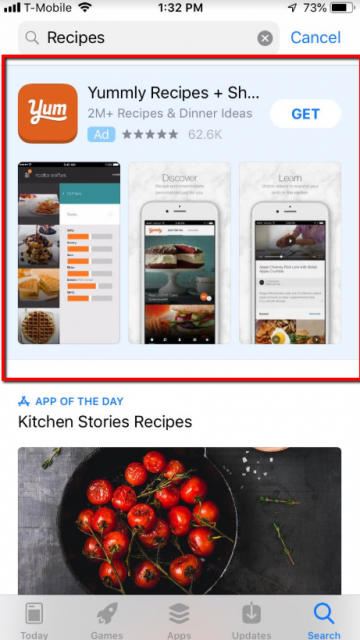 More importantly, ASA is necessary for brand defense. Ads will always show above organic listings. Regardless if you own the top organic listing, if you are not bidding on your own brand term and your competitors are, you’ve lost valuable share of voice. It is also important to invest properly in your brand. With only one ad position on ASA, if you are outbid for your brand term, your ad will not serve. 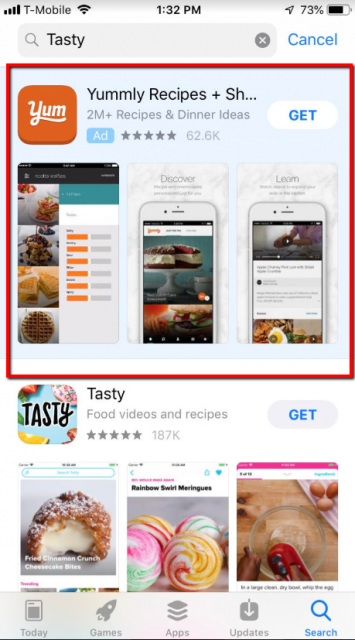 ASA opens access to a large number of people at an important time during the download decision. ASA is now available in over ten countries, in addition to the U.S. Apple has 1.3 billion iOS devices worldwide, and Apple’s App Store receives 500 million visits a week. Plus, 70 percent of all app downloads occur after a search in an app store, with 65 percent coming directly from an app store search. Getting in front of this volume of people during a critical time of the customer journey can help increase downloads and revenue. Since ASA launched in 2016, average mobile user conversions increased by 50 percent and average revenue rose 30 percent.

ASA continues to improve its functionality as it gains credibility as an advertising platform. For instance, last year Apple introduced creative sets to allow for more granular ad creative targeting. Creative sets allow you to create more ad variations based off metadata from the app. You can then select to show specific creative sets with certain keywords to provide a more relevant user experience.

Back in October, an industry analyst projected ASA to generate 2 billion dollars in revenue by 2020. With that level of revenue, there’s no doubt Apple will continue to invest in and improve the platform. At the same time, the app industry continues to bring in billions in revenue. This means Apple Search Ads is not just a nice test platform to spend some incremental budget; instead, it should be an established, valued channel in your app advertising strategy.

If you’re looking for help on your Apple Search Ads strategy, we can help. Get started.