Image Extensions for Google Ads: What You Need to Know 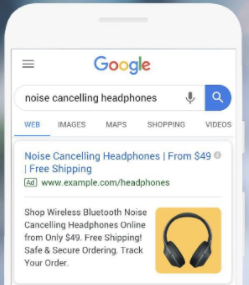 Google Ad extensions are a great way to take up more space on the SERP and provide users with additional, relevant information. Google also reports that on average, there is a 10-15% CTR uplift from implementing a new ad extension, and so far Image Extensions are no exception. Reports from one advertiser revealed Image Extensions had the highest CTR out of all active extensions, 60% higher than Sitelink Extensions.

Similar to other ad extension types, Image Extensions will show alongside existing text ads with the goal of enhancing their message to help drive performance. However, Image Extensions are unique in that they allow advertisers to bring a visual element into otherwise text-heavy ads.

Note that Image Extensions, like all Google Ad Extensions, won’t always show with ads. Extensions will show when the extension is predicted to improve performance and the ad’s position and Ad Rank is high enough for extensions to show.

Image Extensions require a minimum of one square and one landscape image, but can accommodate up to 20 images per extension. Per Google’s requirements, images should not have logo or text overlays.

Image Extensions are still in Beta and, as a newer feature, data on their impact is still limited. However, by helping you to stand out on the SERP, you can expect these extensions to boost CTRs and help drive more traffic to your site. Additionally, adding extensions helps to improve your quality score. Ads with a higher quality score perform better and cost less per click.

Dynamic Image Extensions pull images from the chosen landing page of the ad and require only a flip of a switch. They are a good solution for most advertisers, especially those looking for the quickest implementation. However, you won’t be able to directly control the content of their image ad extensions.

Non-Dynamic Image Extensions are a good option if you have a little more time to either upload images or select images directly from your site. Additionally, since you can add Image Extensions at the ad group level, you can curate extensions tailored to different ad group themes. For example, leveraging different images for an ad group with keywords for men’s running shoes versus an ad group with keywords for mens sweatshirts.

Whether customizing Image Extensions down to the ad group level or applying the same images account-wide, you should use the same best practices for selecting images as would apply to any display ad. To learn how to evaluate and improve your display ads creative, click here.