Similar to Google, managing a healthy Bing Ads account comes with endless tasks that need to be completed in a limited time. For example, you need to bid up strong-performing keywords while verifying that you have negative keyword coverage to block irrelevant traffic. On top of this, in order to expand and refine your account, you need to regularly add new ad groups and campaigns. Oh, and maybe all of the URLs in your expanded text ads in a campaign need to be changed to fit the needs of a given client.

Wouldn’t it be great if this could all be automated? Good news – you can now leverage Bing Scripts, which was released fall 2018, to handle some of these manual tasks for you.

Bing Ads Scripts is derived from the JavaScript language, which is the same language that Google Ads Scripts is derived from. Bing scripts contain many classes centered around modifying certain elements within a Bing Ads account. For example, there are campaign, ad group, ad, and keyword classes. All of these classes have defined operations that can be used to make changes in your account. For example, you can easily enable/pause mass groups of campaigns based on a spend threshold using this section of code:

Specifically, this section of code pauses all Bing Ads campaigns within your account that have spent $1,000 and have had 0 conversions over the past 7 days. This kind of script can be used for any account, and you can run it automatically on a daily schedule to prevent overspending. You could also code a function to re-enable these paused campaigns at a certain time.

Provided your script in Google Ads only contains classes that are available in Bing, it is simple to convert Google scripts to Bing scripts. The primary difference between Google Ads Scripts and Bing Scripts is that the main, top-level object is “BingAdsApp” instead of “AdWordsApp”. Because of this, all you need to do is simply swap out the two object names and then correct the red line errors from there. For example, the above code, in Google Ads Scripts, would translate to the following:

You probably spend a lot of time in Bing Ads optimizing keyword-level bids. This can easily be automated with Bing Ads Scripts. Look at the code below: 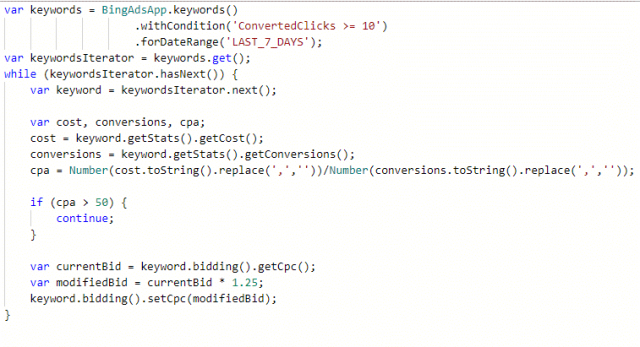 In this section of code, keywords are bid up by 25% if they have had at least 10 conversion clicks and a CPA less than or equal to $50 over the past 7 days. You could further develop this code to bid down poor-performing keywords and use different metrics to decide whether to bid up or bid down keywords.

Bing Scripts is not only capable of performing automation, but it can also pull external data and connect to APIs. One example of this is using Bing Script’s UrlFetchApp to connect to the Google Sheets API in order to output data into a workable spreadsheet. See the code below for an example of this: 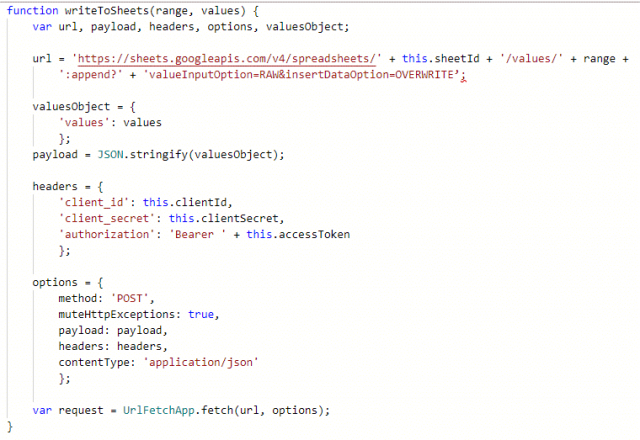 In this section of code, the user is sending an array of “values” to a Google Sheets spreadsheet with UrlFetchApp. This array of values could be data from Bing Ads or results from a script execution. Another example of UrlFetchApp is programming Bing Scripts to pull data from an API (example: weather data) and make automated bid changes based on the data. Bing Script’s UrlFetchApp makes the tool’s opportunities endless.

Bing Ads management can be time-consuming, but using Bing Scripts can help streamline your account work. By automating the more basic tasks and reports with scripts, you can free up time for higher level strategy items such as ad copy brainstorming and advanced testing initiatives.

If you’re looking to dive into automation, contact Metric Theory today to discuss potential options for your account.