“Target” is a key term in marketing. Perhaps our most important term. Who are you speaking to? There are a variety of ways to think of targeting in marketing: behavioral, psychographic, demographic, geographic, etc.. And while all of these are important, it’s also crucial to understand how to talk to people from different generations. In this Marketing to Generations series, I’ll be covering digital marketing to Gen Z (1995-2010), Millennials (1980-1994), Gen X (1960-1979), and Baby Boomers (1940-1959) so you can know if you’re reaching these groups in the right place and with the right message.

We have already taken an in-depth look at advertising to Gen Z, Millennials, and Gen X. It is time for the final generation we’ll be covering in this series: Baby Boomers.

Up until Millennials became the largest Generation, Baby Boomers contained the most members in their cohort. As the generation born during and after WWII, they have experienced extreme technological and societal changes over the course of their life.

Baby Boomers were born into a world recovering from horrific acts of violence. World War II had an estimated 60 million military and civilian deaths, the world saw the awful results of atomic bombs. They lived through the Korean War, the Cold War, were drafted into the Vietnam War, and many Baby Boomer people of color had to contend with the abominable racism in the United States and fight for the ongoing Civil Rights Movement. They saw JFK assassinated, the Watergate Scandal upend politics, and horrible oil crises strike in the 70s.

Yet all of this occurred in the US in a time of relative wealth and prosperity. The home became the focal point—the safe point—and traditional roles and values from previous generations reemerged. Baby Boomers came to place a lot of value on relationships, including the relationship between a business and its customers. Thus, they tend to expect a high level of customer service.

Baby Boomers also tend to have a strong work ethic. They believe that if you put in the effort, you’ll be rewarded. And if you don’t, then you don’t deserve it. This also tends to make them very competitive. They would rather stay at a single company and race up the corporate ladder than be disloyal and jump around from company to company (though many are now retired).

As you typically see when people get older, they tend to have more money than the younger generations. Their education and housing cost a lot less than it does nowadays, so this desire to make sure their hard-earned money isn’t taken from them shows a tendency toward thriftiness.

There are a lot of clear differences between Baby Boomers and later generations, especially Baby Boomers that were born earlier during their generation. So, it makes sense that Baby Boomers prefer shopping in-store rather than online. This again lends itself for a strong desire for good customer service and friendly sales staff. If you are marketing online, know that Baby Boomers will still convert with online sales, but if you have a physical location, emphasize this through location extensions and other callouts.

Baby Boomers also want to see good value in the money they spend. They are now at the point in their lives where they are in retirement, and making smart financial decisions is critical for them. While certainly not the case for all Baby Boomers, bundle sales are an effective way to communicate this. And unlike their younger counterparts, Boomers are 34% less likely than most consumers to seek out brands that reduce energy use. They’re also less likely to care about other CSR (Corporate Social Responsibility) initiatives than younger generations.

Boomers, like many other generations, take recommendations pretty seriously. You can still use influencer marketing to boost your product, but make sure that your chosen influencer is representative of your target market. And remember! A lot of Boomers now consult their children and grandchildren about certain products, especially technology. Keep that in mind when messaging your product or service. You might not be speaking just to one generation.

Now that we know a bit more about the mindset and consumption attitudes of Baby Boomers, let’s look at some ways to reach them.

While we’re certainly not going to see Baby Boomers as heavily involved on newer social media platforms like TikTok or Snapchat, there are certainly still plenty of ways to reach this generation: 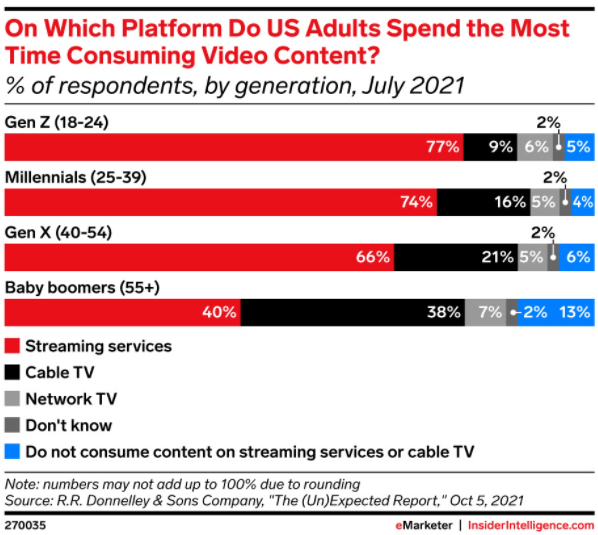 Messaging That Speaks to Baby Boomers

So we’ve learned where it will be best to reach Baby Boomers, now let’s tackle how to message to them!

Of course, all this is just a starting point. Narrowing all members of a generation down to a few bullet points is a way to sum up the main ideas, but these vary even more within the different industries and unique audiences your brand is seeking to bring in. For more help crafting a digital marketing solution to reach and convert your Baby Boomer audience, talk to our team!