I’ve heard every excuse in the book from B2B advertisers who don’t trust Bing. Everything from “I tried it three years ago and didn’t get anything,” to “why waste my time where the market share is so small?” Despite what you may have heard, Bing is not inferior to Google, and is already helping B2B advertisers find a whole new market of qualified searchers. If you’re a B2B advertiser, here are four reasons to stop holding out on Bing.

In June 2015, Bing captured 56 million searchers not reachable on Google, and Bing searches comprised 33% of the total US search market, according to Bing Ads Audience Insights. Not only are there millions of searchers on Bing that are not available on Google, but avoiding Bing means you miss out on a third of the US search market. Looking specifically at the technology industry, the same report shows that 24 million out of a total 32 million technology searchers on Bing in June 2015 were not reached on Google. That means three quarters of total technology searchers were unique to Bing.

Bing excels at reaching an older audience with higher incomes, the same C-Suite decision makers that call the shots on what new software or technology to purchase for their companies. What do we know about these people? According to Bing’s Audience Insights Report, one third of the Bing Ads audience has a household income over $100,000 and about 40% of the Bing Ads audience is between 35 and 54 years old.

Generate the Same (Or Better!) Rate of Qualified Leads as Google

Despite common misperceptions, I’ve seen Bing drive higher quality leads than Google in several accounts. Many B2B advertisers are heavily focused on lead quality and prefer to optimize using back-end lead quality data. Advertisers are frequently concerned that Bing will not deliver as many qualified leads as Google due to a misinformed preconception about Bing users, or the quality of the search engine itself. I have found this concern to be unfounded in many cases, and have seen Bing deliver higher quality leads than Google for several different advertisers. Take the two examples below:

1. This B2B advertiser sells inventory management software. They saw a better rate of top quality (Grade A) leads on Bing than on Google over the last six months.

2. Another example comes from a B2B advertiser that sells asset management software. The percentage of leads that become sales opportunities and the percentage of junk leads are practically equal for Google and Bing over the last three months.

Bing often generates leads at a quality similar to Google leads, but at a cheaper cost. Because Bing is less saturated with advertisers, the CPCs aren’t as expensive, which means you can get qualified leads for a significantly lower CPA. According to a recent study conducted by AdGooroo, Bing CPCs in the Business vertical average 63% lower than AdWords. Across all verticals, Bing CPCs average 43% lower. 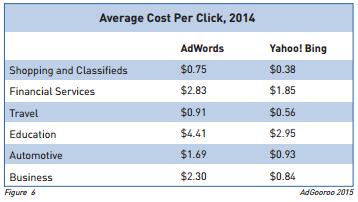 Bing can reach a large and unique audience and drive conversions that are equally qualified for significantly less money. So stop missing out on one third of the US search market, and get some Bing campaigns up and running.