Takeaways from Growing Your Voice: Empowering Lessons From Female Leaders

“Any company can build community. Those communities have helped people recognize that they can be their authentic selves.”  – Lynne Kjolso, VP of Global Corporate Sales at Microsoft

This sentiment was just one of the many inspiring moments at Growing Your Voice: Empowering Lessons From Female Leaders, and it resonates strongly with our team at Metric Theory. Our goal for the event, articulated perfectly by Lynne, was to empower and support those in our own community and beyond. We strive to put an emphasis on gender equity, so we were thrilled to see over 100 professionals coming together for our panel event on Tuesday!

Our panelists are all leading women in their field, representing a range of industries from biotech to tech startups. While their backgrounds and career paths vary, the dialogue between them served as an indication of the shared experiences of women seeking leadership positions in the workplace. Offering stories from their own experience to a lively crowd, our panelists sparked a conversation about how everyone can work toward gender equity. 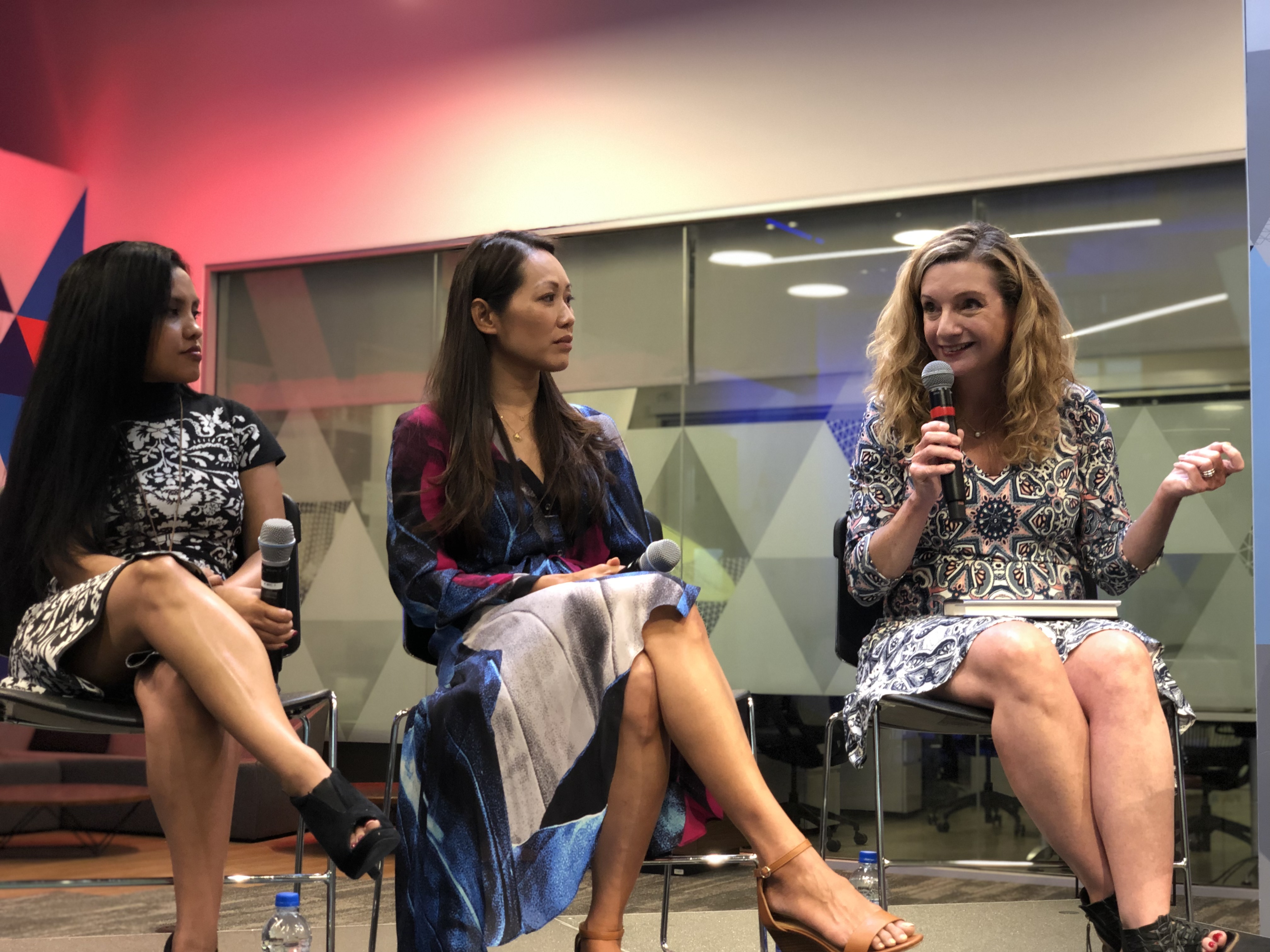 On Leading with Values

“Don’t be attached to anything. Including outcomes. We’re not defined by our successes or failures. Instead we’re defined by our values, living out those values every day, and the journey’s we’re supposed to take.” Jane Chen, CEO of Embrace Innovations, spoke about her own experience learning to approach work in a way that affirmed her values. She shared the story of a global distribution deal falling through earlier in her career, and how this experience helped her come to terms with the notion of impermanence. She had been too wrapped up in the final product of the negotiation, rather than the opportunities for growth along the way. Upon reflection, Jane was able to work toward goals in a more holistic way.

Expanding on the idea of leading with a moral compass, Maya Lockwood, Communications Director at IndieBio, described times in her career where she asked herself, “am I good enough?” She explained that in these moments, it is crucial to explore your core belief system, both in life and in the workplace. Taking a step back to develop mental health, and identify what is important to you can be the most powerful tool for gaining confidence in the workplace. Maya’s suggestion for internal reflection struck a positive chord for nurturing oneself within an often high pressure environment.

No leadership style is the same, and our panelists conveyed that as a woman, it can be difficult to develop an authentic and effective style with implicit gender roles ingrained in both the professional and personal sphere. Jane opened up about an experience early on in her role as a CEO. She became emotional at a meeting due to the taxing hardships her company dealt with on a daily basis, and was embarrassed at first. Only later, when a staff member thanked her for sharing her emotions with the group, she realized that her “image of what a CEO should look like was based in stereotypes that were male oriented.” Jane urged us to get rid of notions of what a CEO “should be,” and rather lead authentically in a style that you feel comfortable with.

Brittany Couch, Senior Marketing Manager at GoFundMe, weighed in on developing her leadership style by sharing a revelation she had. “I realized at some point, I wasn’t telling people what I wanted, I was waiting for people to tell me what they needed.” This was a turning point for her, and she worked to speak out more clearly about her opinions and goals. Now, as a manager for a larger group, she applies this knowledge to her daily interactions. Brittany says that she makes an effort to check in on her team members, asking them how they are and if they are satisfied with their roles. Opening up a path for communication, she conveyed, strengthens team dynamics and overall performance.

Another common theme the panelists stressed was the importance of women advocating for themselves during negotiations. Lynne Kjoslo, VP of Global Corporate Sales at Microsoft, encouraged those who were seeking out a promotion to  stick with their goal. She addressed the women in the room, reminding them that if they believe their performance is worthy of recognition, they should have confidence during negotiation for a raise or promotion that both sides are ultimately benefiting. Lynne continued, “Negotiations are all about knowledge, an exchange of value. As soon as you understand what it takes to get promoted, then you can start to build the case for yourself.” Putting in the time to prepare, she recommended, will show key decision makers who is best prepared for the role. To this point, the audience nodded enthusiastically, engaging with the idea that women should go after their goals unapologetically. 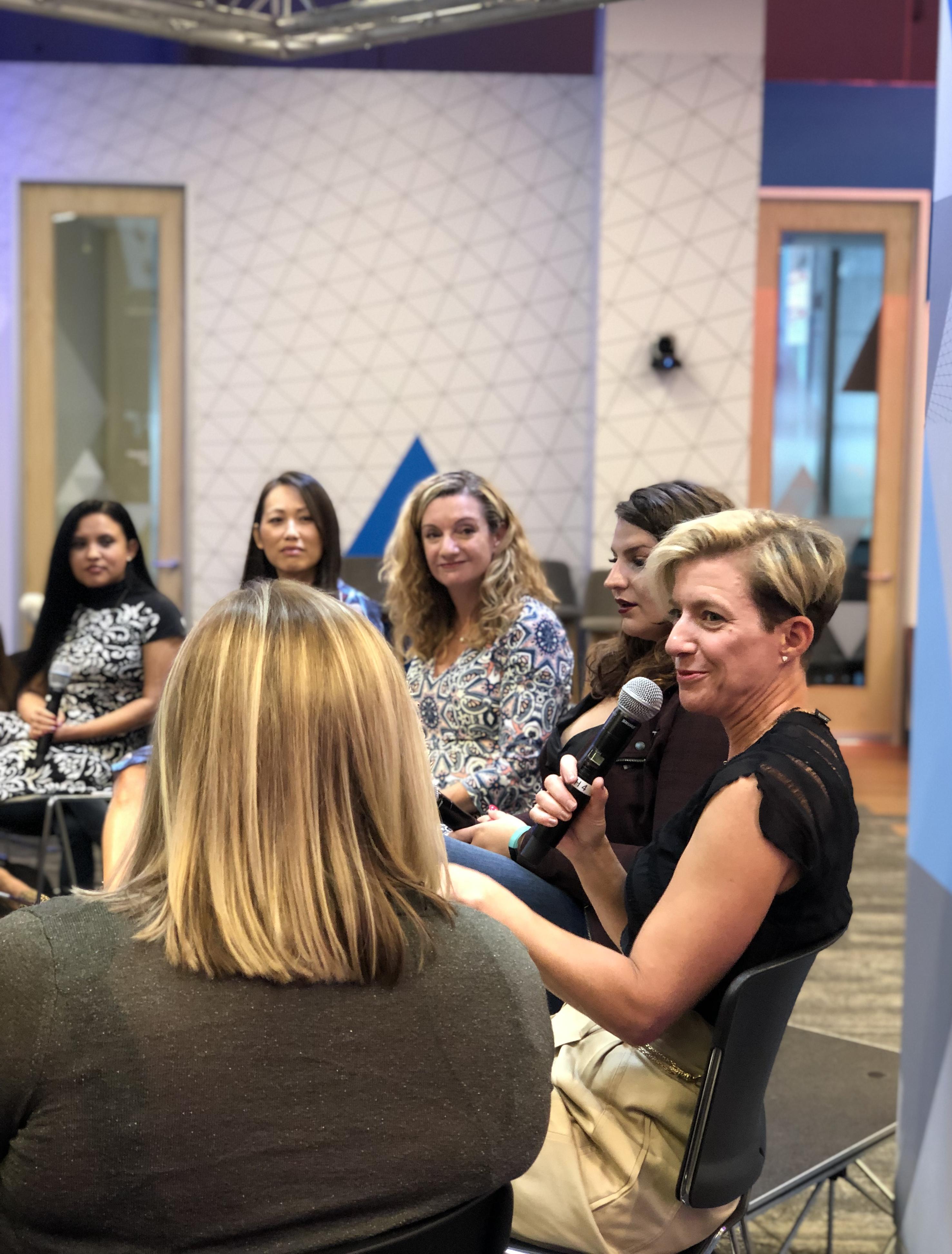 Throughout the process of establishing your career path and leadership style, the individuals that you surround yourself with and turn to for advice are critical for growth. Our team at Metric Theory was particularly inspired by the panelists’ advice on finding a mentor who can help you grow your voice. Liza Hausman, VP of Industry Marketing at Houzz, spoke about her own process hiring, and how she is not only looking for candidates who will fulfill the role, but also for those who would benefit from her mentorship. She shared that, as an employer, “You owe them [a mentorship role] just as much as a job.” The continued support can not only smooth a transition into a new role, but also instill confidence in a mentee. When identifying professional relationships that have the potential to become mentorships, Liza suggested letting them know you appreciate the time they’ve taken for you, even if you don’t feel comfortable asking for a mentorship right away. This can go a long way and plant the seed for a mentorship down the road.

The incredible discussion that took place went beyond core themes of leadership, by addressing next steps for both women and men alike to support the empowerment of women in the workplace. Shifting the conversation to be more inclusive of everyone and giving space for women’s voices can make all the difference. By sharing their own paths to leadership and the challenges they face on the way, our panelists led a wonderful dialogue centered the narratives of women leaders.

A huge thank you to our partner Microsoft Advertising for helping put the event together, and to our amazing panelists who engaged the audience for a night of empowerment. We hope that our attendees left with the tools to support the empowerment of women! If you would like to stay updated on Metric Theory news and future events like this one, subscribe to our newsletter today! 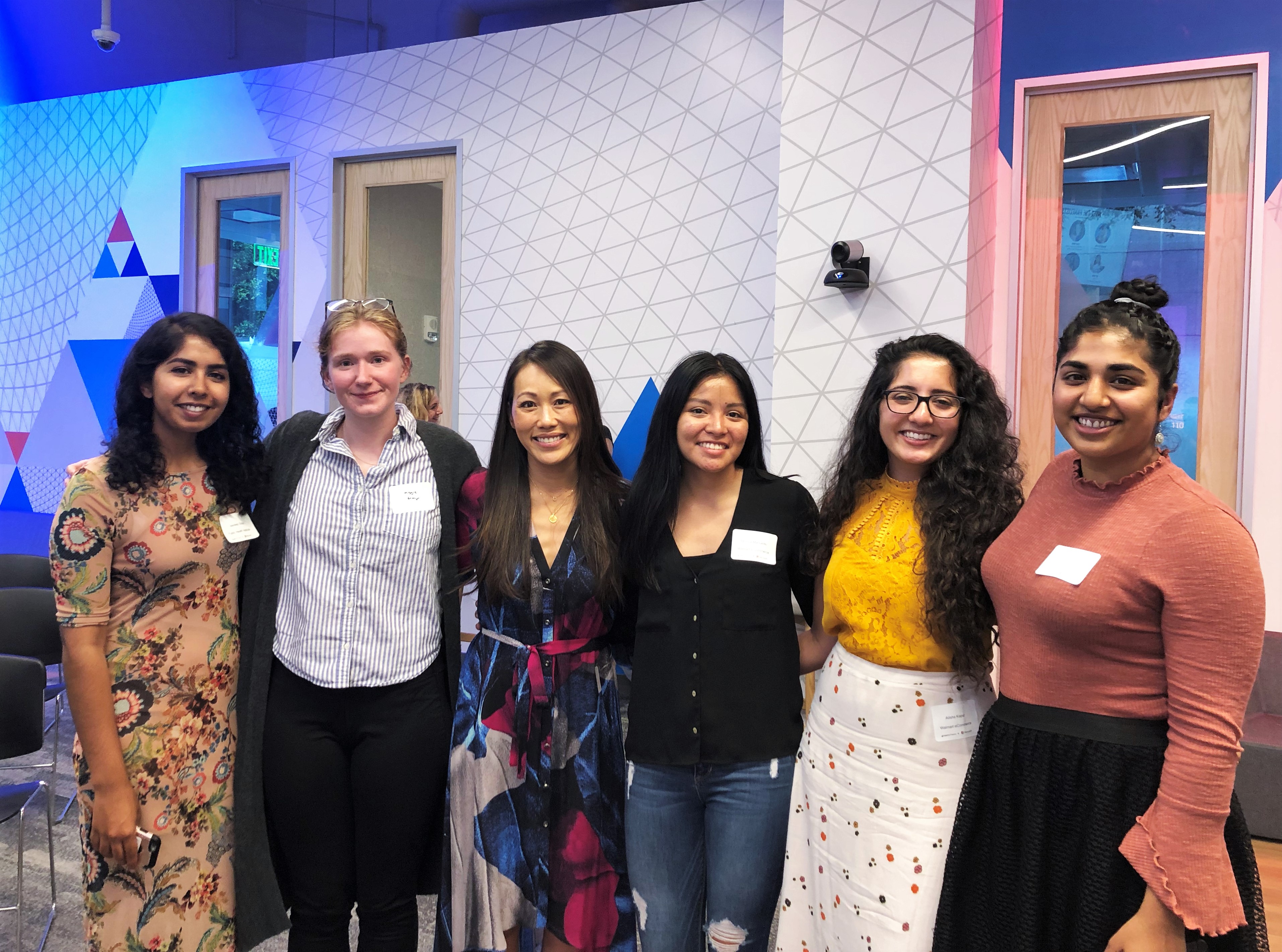