How to Become the Steph Curry of Paid Search

Stephen Curry of the Golden State Warriors is wrapping up an historically strong season. He became the first player in NBA history to win the league’s MVP award by unanimous vote, while leading his team to an NBA record for wins in a single season. Advanced analytics show him as having the greatest offensive season of the modern era. Additionally, he’s captivated fans, achieving the most jersey and shoe sales of any player in the NBA.

Much of Curry’s appeal is that he is, by all accounts, a “normal guy,” and a contrast to the titans, with big muscles and bigger mouths, who have previously occupied the NBA’s “best player in the world” category. So, what can Steph Curry teach us about being historically great at PPC?

1. Play with a Chip on Your Shoulder

Steph Curry was a scrawny high-schooler who didn’t draw serious consideration from any powerhouse Division 1 college basketball programs. He attended Davidson, a small liberal arts college in North Carolina. Despite his tremendous career there, six teams passed him up in the NBA draft before the Warriors ultimately drafted him. He’s thrived in the underdog role, and used it as internal motivation.

Terrific PPC Account managers will take a similar approach. Look upon each account without worrying about which other agencies, with how many years of experience, have already worked on it. Don’t accept that the best you can do is keep results flat over last year just because competition has driven CPCs up 35%. Don’t worry if someone else tells you it’s a “tough” account. Don’t be confined by outside expectations. Let your talent and hard work be your defining characteristic.

2. No Replacement for Hard Work

Steph Curry has become legendary for his intense and detailed pre-game routines. Fans arrive at the arena an hour early simply to watch him warm up! He also works as hard as any athlete in professional sports in the offseason.

PPC Account managers should take note. There is no replacement for hours spent in an account. You can leverage all the best bid algorithms and write ad copy better than a Shakespearean sonnet, but true superstar PPC managers are clicking around their smallest campaigns. They’re looking at each search query report at 7, 30 and 90 day intervals in hopes of finding some trend in how they’re gaining traffic to the site. They’re reading the 32-page white paper on the benefits of cloud-based payroll administration to identify one additional keyword that’s not already in the account. They never forget that the one variable always 100% in their control is their ability to outwork their opponent.

Arguably the most incredible aspect of Steph Curry’s ascent is that he has changed the way basketball is played. In addition to heavily influencing the volume of 3 pointers that teams attempt in a game, he’s also redefined where people can shoot from. Previously, unless it was the end of a quarter and time was running out, conventional wisdom said never to shoot from more than a few inches beyond the three-point line. Curry hits an otherworldly 68% on shots from 28-40 feet out. 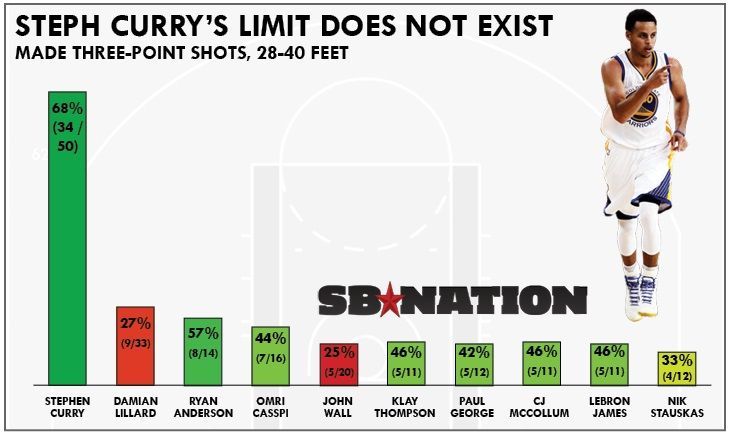 No one else comes close to what he can do. Image via SB Nation

In PPC, you will speak to clients or previous account managers who will provide certitudes such as, “Display campaigns will never drive direct conversions,” or “pricing info always wins ad copy tests for these guys.” To be truly spectacular, sometimes you need to test even historical data and conventional wisdom. Don’t be afraid to violate that “unbreakable rule” if you have a hunch that your account will react differently than most. These breakthrough moments are often when you’ll see your strongest performance.

Part of Curry’s likeability, which is ubiquitous in feedback among his teammates, his coaches and his fans, is how humble and appreciative he is off the court. He’s always quick to thank his coaches or highlight the play of his teammates when interviewed after a strong performance. He also never hesitates to emphasize where and how he can still improve as an individual. This is where Curry’s demeanor differs the most from superstars who came before him.

In paid search, an account manager who doesn’t think he has anything to gain from soliciting input from his team is an account manager that has capped his potential results. You must understand how to draw ideas and insights from the other brilliant PPC pros around you. Every time you receive feedback on how someone else might have tackled a problem differently, you will expand your paid search knowledge and learn new ways to approach tough questions and develop creative solutions.

Those of us in the Bay Area are privileged to be witnessing one of the great performances in NBA history. Paid search pros should take a few pages from Steph Curry’s playbook – attack your accounts with a chip on your shoulder, outwork everyone, don’t let “what’s possible” stand in your way, and approach it all with humility and a thirst for success, and you might just become the Steph Curry of PPC.