Welcome to part three of our series on lifetime value (LTV). If you have arrived at part three and haven’t read parts one and two yet, then go read them first. Or, just read this, and then go back to read part one and two. You pick. It’s kinda like Star Wars.

The following scenario is based on a collection of real-life PPC examples.

It was June of 2014, and all seemed well in the world of PPC for Planet Bird, our online bird feeder reseller. They were the primary player in the online bird feeder space, and enjoyed fantastically low CPCs around $0.50. They had plenty of good traffic, which generated online sales, and provided a comfortable return on their ad spend (ROAS) of 4 to 1.

Everything was smooth sailing. Or, so it seemed.

Feeding birds can be surprisingly cutthroat. Photo via Pexels.

One fateful day in September of 2014, another company, Bird Feeders USA, decided that they too should join the highly-profitable online bird feeder reselling space.

But that was just the beginning.

All of a sudden, multiple competitors flooded the market in a short period of time. Everyone wanted to sell bird feeders for $100, while only paying $0.50 to acquire the traffic. It wasn’t just Planet Bird anymore, but now Bird Feeders USA, Bird In Hand, Feed the Birds, and SaveAMockingBird.com. All were targeting the same customers, the same search terms, and the same sales that Planet Bird once had entirely to itself.

And the scariest part? Most of the new competitors had bigger budgets and more investor money than Planet Bird. As a result, Planet Bird’s ROAS plummeted as competitors gobbled up their market share.

Planet Bird didn’t know where to turn next. No longer could they run their PPC campaigns and expect to pay $0.50 per click. In fact, they barely showed up on the search results page when they bid $0.50.

The question that Planet Bird had to answer now was: what ROAS do we need as a company to remain profitable in the long run? Their space had become extremely competitive, but they didn’t want to exit the industry for good.

Planet Bird’s profitability became clearer to them when they considered not only their profit margin on the initial sale of a bird feeder, but also the value a new customer provides as a returning customer over their lifetime (LTV). Below you’ll find an example of their calculations.

They first recognized that, on average, a customer who purchased a $100 bird feeder would go on to purchase two $50 jumbo bags of bird seed over the following year. Planet Bird, as a reseller, had a profit margin of 35% on all of these products.

With a quick calculation, Planet Bird determined the more accurate lifetime value of these customers:

Looking at this data, Planet Bird realized that they were actually making $35 (100%) more additional profit per sale than they had initially counted by just considering only the bird feeder purchase profit. As a result, they cut their ROAS goal in half, from a goal of 4 to 1 to a goal of 2 to 1.

This new goal enabled Planet Bird to increase their paid search budgets and bids (from $0.50 to $1.00 CPCs) and compete against their new competitors without sacrificing the company’s profitability. Look at the before/after results in the graphic below: 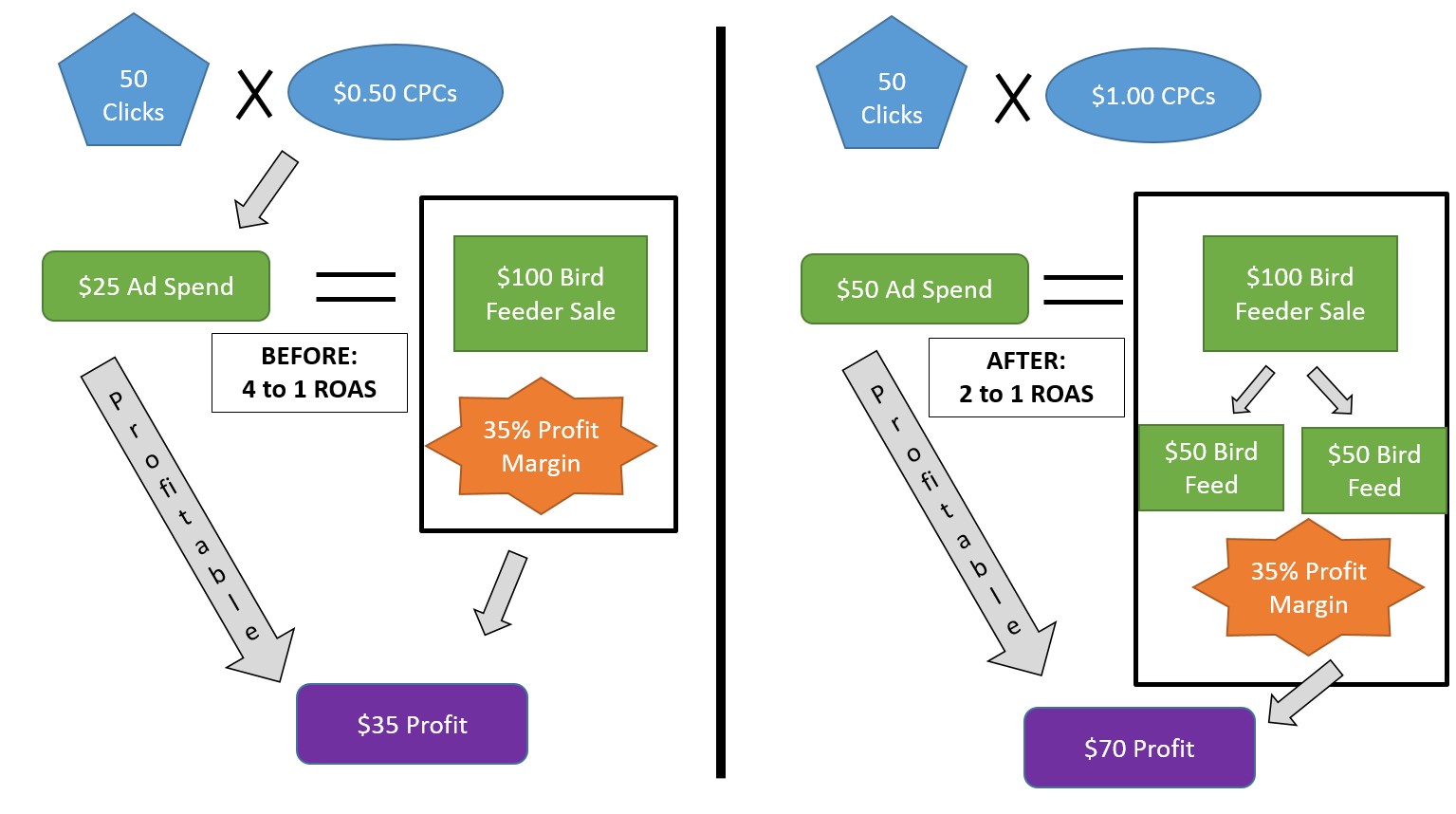 The end result? Planet Bird acquired more new customers and site traffic than competitors who were only basing their bids off of the profitablity of the first transaction – and those competitors eventually couldn’t compete in the space at all, thinking it to be unprofitable.

Paid search continues to get increasingly competitive each year. Knowing your company’s profits not only from the initial sale or deal, but also accounting for the lifetime value of each new customer’s repeat purchases, or contract renewals, is essential to competing intelligently in the space and maximizing your reveue within a set budget.

Have you been facing tough competition in your PPC landscape recently? Be sure to read about how Metric Theory account managers tackle stiff competition in PPC accounts.