How A Performance Marketing Agency Tests Our Own Website

Last October, we launched the new MetricTheory.com. It was an overhaul, not just a facelift, intended to make conversion via form fill easier, clearer, and more integrated throughout the site. With our changes, we expected a higher conversion rate compared to the previous site, which we did in fact see post-launch. 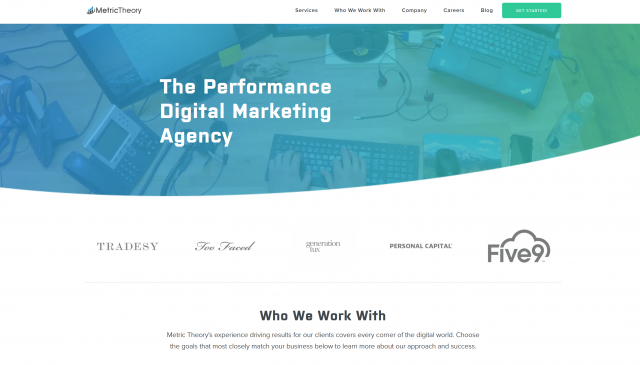 As with any redesign project, there were proponents and critics of everything from creative choices to copy to functionality. Because we’re a data-driven agency, we set out to satisfy the feedback with the ultimate adjudicator—performance data! Here are three tests we ran after launch, why we ran them, and what we learned.

We had an internal debate about the effectiveness of the video in the homepage hero. Video supporters felt that it presented a more dynamic image of the agency to our visitors and would translate to higher credibility and more consideration. Opponents thought the video might distract users from exploring the site further.

Testing for the impression the video left on our audience would be pretty difficult, but testing for the impact the video had on site behavior was actionable. In this case, we evaluated video’s impact on bounce rate, time on site, and pageviews, utilizing conversion rate as a proxy for the credibility factor.

The video hero slightly increased bounce rate, which was expected considering the added page load time versus an image. However, all other site behavior metrics, including our key metric of conversion rate, were stronger with the video. We concluded that having a video hero had a very positive effect on consideration for Metric Theory!

We launched the new MetricTheory.com with a persistent CTA button of “Let’s Go!” in the navigation bar, the favored rallying cry of MT’s own Derek Gerberich. We decided to test “Let’s Go!” against a more traditional CTA of “Get Started!”

Supporters of “Get Started” thought it would be more recognizable and actionable to our audience, thus yielding higher click-throughs to our lead form page. Again, we monitored conversion rate as a secondary metric.

This test was tough to conclude with a high degree of significance. The results favored “Get Started!” over “Let’s Go!” both in button clicks and form fills. We therefore decided to move forward with “Get Started!”

Our lead form page does not see as high of traffic velocity as our homepage, so we wanted to make more changes here to see if we could generate a markedly different result.

We chose to change the following elements:

Hero image: Some felt that the original image did not elicit the appropriate signal for the page. We tested the original against an image of people in conference room during a presentation to evoke the personalized nature of the conversion event, an account analysis.

Body Copy: The original body copy started with a short descriptive paragraph followed by bulleted values. We analyzed the original compared to body copy leading with bullet points of what the user would get. 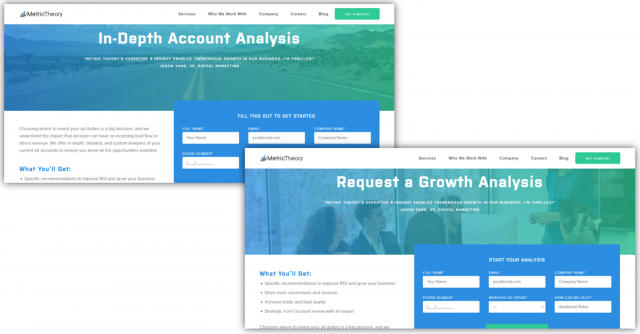 The results have been mixed and inconclusive. In addition, both the quality and volume of the traffic driven to the lead form page changed during the period of the test.

It’s important to isolate variables when testing.  With significant front-end traffic changes, it was difficult to analyze test results and we had less confidence in the results.  We will continue to test and tweak our lead form page in the future while isolating as many variables as possible.

No website is ever truly maximized for performance. If you’re not consistently budgeting time and resources to improve it, you could be missing out on major opportunities for more efficiency and growth for your business. Check out our new website for yourself and see what you think. Contact us with your thoughts.

How to Use Digital Marketing to Complement Traditional Campaigns

How to Use Digital Marketing to Complement Traditional Campaigns