Growing Your Voice: Empowering Lessons From Female Leaders was a huge success — one week later, we are still feeling inspired by the discussion on gender equity in the workplace. Our panelists’ stories sparked an incredible dialogue about what we all can do to empower women’s voices.

To continue the conversation beyond the event, we sat down this week with Jenny Gale Howe, Metric Theory’s VP of Sales. As a founding member of Metric Theory with over eight years of digital marketing experience, Jenny is an integral part of the team. She excels in building relationships with prospective clients and leading paid media audits. When she is not analyzing digital marketing strategies, you can find her in the great outdoors, surfing or hiking! Continue reading to learn more about the defining moments in Jenny’s career and her advice for effective negotiating. 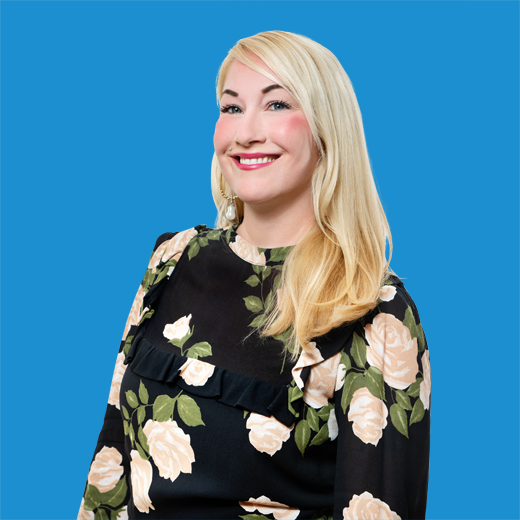 Let’s talk a little bit about your background and how you came up in your career and even before that a little bit. What was it that got you interested in pursuing a career in marketing?

Well, the funny thing is, I had no intention of ending up in marketing at all. I studied Russian in St. Petersburg, Russia while I was in college and had every intention of coming back to the states and working for the government. In fact, I was determined to work for the CIA at the time and had put all my effort into scholarships and courses that would prepare me for that path.

However, while living abroad, my perception of the world began to change, as did my idea of a “dream job.” I decided I wanted to do something international, but more business related, so after college I immediately enrolled in a Master’s program that would prepare me for international business negotiations. My first job after that program was as an “International Management Trainee” at a Norwegian company called Meltwater. I wasn’t really prepared to fall backwards into a sales role at that time, but that’s what happened, and I was happy to be working for a company with such an international scope. Finding out I was really good at sales was a complete shock to me, though. If you’d told my 20-year-old self that sales would become my career path, I would have laughed out loud … but ultimately, it was my true calling.

What was your first job out of college? Do you feel like that job helped shape your trajectory up to this day, either by ruling out any career paths or helping you realize this is what you wanted to do?

My first official job out of college was for Acton School of Business in Austin, Texas. I was starting my own master’s program at St. Edward’s University at night but Acton was my day job, so it was almost like earning an MBA at the same time as my traditional master’s degree. Acton was founded by Jeff Sandefer, an entrepreneur and teacher who was ranked one of the top ten entrepreneurship professors in the country by Business Week at the time. The coolest part was that Acton was comprised of teachers who were real-life entrepreneurs (extremely successful ones at that!) — not just people who could talk the talk. These guys could seriously walk the walk, and I was lucky enough to be able to audit these classes as part of my job. The school was using the Socratic case method, along with Harvard Business School exercises and business simulations. It was an extremely immersive curriculum that put students into real-life business scenarios and forced them to make tough decisions on the fly. I learned so much from watching that program from the sidelines, and the ongoing joke between myself and the students was that I was “doing things the smart way” — getting the “MBA” and getting paid to do so. It really did shape my development as a young professional and altered the course of what I wanted to do in my career.

What was your support system like as you advanced in your career? Did you have a particular role model?

My biggest role model in my early career development was my Russian History professor in college. She was over 80 years old at the time and had actually been an American spy in World War II in Russia. Even her husband, a pilot in the war, wasn’t aware of her role, and she had to keep a huge part of her life secret for the sake of others. She was fascinating, and I used to go to her nursing home on my days off to watch old war movies with her and listen to her stories. I attribute my moving to Russia to her, and if it wasn’t for her influence, I might never have become the international adventurer I am now.

You are VP of Sales at Metric Theory – do you feel like you’ve made it?

I don’t think I’ll ever “stop working.” I really enjoy it and have so many things I want to do on so many different levels, not just business-wise. I’ll consider myself “made” when my first novel is published … but I’ll have “made it” when my 10th hits the stands. 😉

Were there moments in your career where you felt you might want to do something different?

I think the honest answer is I always knew I needed to be in sales after I took the leap. So the question was really more along the lines of, “What do I want to be selling?” The beauty of sales is that those skills translate across industries, so if you get bored you can move somewhere else and hit the ground running. Sales is an extremely versatile skill.

Was there a pivotal moment in your life that encouraged or motivated you to get to the position you are in currently?

The pivotal moment in my Metric Theory life was when I decided to take a leap of faith and start working out of an apartment in San Francisco with six previous colleagues to try to build a mountain from the ground up. We just knew that we could do it, so it didn’t feel too scary, but looking back, it was a pretty big leap. Going from being a top seller at a global software company to cold-calling from Ken’s living room was definitely an interesting transition. But luckily, it was one that worked out in everyone’s favor.

What does a typical day look like for you? If day to day varies greatly, is there any one thing that you make sure to do every single day?

My schedule varies greatly, but if there is one thing I’m constantly doing, it is relationship building with my prospective clients. I am “old school” in the sense that I truly believe direct communication is the key to trust and the foundation for a happy new client. So you’ll find me on the phone most of the day, talking to people who are considering Metric Theory in various levels of the sales process. I’m a big fan of picking up the phone and having a real conversation.

What steps do you take to ensure you are always learning and improving in your job?

In digital marketing, the key to growth is constant training. Things change in this industry daily, so staying on top of those changes is paramount to success.

Do you have any creative outlets, or something outside of your job that helps you balance your work?

I love to write, and like I mentioned, someday I hope to publish a book or two. In my free time I love to surf, and most people will tell you I’m the biggest pit bull fan on the planet. I have two at the moment who occupy a good deal of my time. I am also a classic car collector. My daily drivers are a 1965 Ford Fairlane and a 1978 K5 Blazer. I’m also an avid traveler and spend a good deal of time in Mexico specifically, where my husband owns a cocktail bar.

If you could go back and talk to yourself in her early 20’s, what advice would you give her?

Don’t stress the let downs … those are just segues to greater things.

What’s the best piece of advice you’ve ever been given?

My grandfather and I were extremely close, and I remember one day when I was very young, he looked at me in the kitchen over breakfast one morning and said, “You can be anything you want to be, Jenny Gale Howe. Anything. President if you want to. Don’t ever forget that.”

It wasn’t so much advice as it was an eternal compliment that I look back to whenever I need a confidence boost.

When you have engaged in negotiations in your career in the past (whether it was salary negotiation, client-facing negotiation, or negotiations between your colleagues), have you ever feared coming off as pushy or unlikeable or even that there would be repercussions for negotiating as a woman? Any advice for effective negotiating?

My sales style is to build strong bonds with people but at the same time exude extreme confidence in what I’m saying. Sometimes certain personality types will see that as pushy, or me as unlikeable, absolutely. I think all women have to deal with that stereotype. But I never let that slow me down. My job is to show that despite my tone, I’m bringing value to the table. And if I can get that value across, then people will eventually warm to my style. You can’t be pushy without the value.

Have you ever purposely held back from something (sharing your opinion, reaching for a certain type of job, etc) because you think you would be rejected for being female?

I can’t say that I have. I’m pretty good at speaking my mind. I was the girl who was put in the boy’s heat in swim team because my times were so much faster than my girl peers. From a very young age, I never felt inferior to boys or felt any need to mask my thoughts, opinions, or talents. Well … that’s not completely true. In the 80’s, I applied to be a Boy Scout and was obviously rejected. The recent announcements that girls can now join felt like a personal victory for my 8 year old self.

What additional advice, if any, would you give a woman looking to lead?

I think it is incredibly important for women to remember they have options. Not all women want to be people managers, for example, despite that being something most people think women are “good at.” In my case, I wanted to be more of an individual contributor, which was a break from what many might have thought I would want to do, or should be doing. The key is to know yourself, and if you truly find more joy in a role that is not traditionally female, go for it! Chances are, you know yourself better than anyone else, so you should always trust that intuition.